In recent years, China's leisure and ornamental fisheries have developed strongly, and have become a new bright spot in the development of fisheries. Ornamental fish are â€œwalkingâ€ into ordinary families. The main characters of the eco-aquarium are fish and aquatic plants, and visual appreciation is its main function. The lighting system of the aquarium plays a decisive role. LED is considered to be the main and ideal artificial water and plant light source in the future. It has the advantages of high brightness, narrow band, energy saving, environmental protection and long life. Therefore, the experimental research on the influence of monochromatic LED on aquatic animals and plants was carried out, and the application principle and key technical parameters of LED in aquarium lighting were obtained.

The seedlings of similar aquatic plants with similar growths were divided into 7 groups, each group consisting of 4 species (Lianhua, water hyacinth, blue silk, and mushroom), each of which was distributed in 21 beakers (beakers The same amount of distilled water of the same quality was added; 7 test groups were respectively treated with light conditions of R, B, Y, G, W, R + B, and UV under the design of the study, without natural light, each light source The light source suspension height is 10cm, and the illumination period is set by the microcomputer timing device. The time is: 6: 00~8: 00; 10: 00~12: 00; 14: 00~16: 00; 18: 00 to 20: 00.

1. 2. 3 The effect of monochromatic LED illumination on fish growth

The test set up 6 test groups, each of which is a group, each set of 10 tiger skins, red arrows, black Mary, and 1 scavenger fish. The water quality of each group is the same, the aeration pump increases oxygen throughout the day, and regularly changes water and disinfects the drug. 0 0. 05 g each time. The illumination treatment methods of the six test groups are the same as (1) (no R + B mode).

The light adaptation condition of the fish was observed at 1 min, 5 min, 10 min, 20 min, 1 h, 2 h, 4 h after the start of the experiment. The length of the fish and the weight of the fish were measured by self-made methods at the beginning, 20 days and 40 days after the test. , classification statistics, record the average growth of fish length and the absolute and relative increase in fish weight gain; observe the changes in water quality, fish body color change, growth status, survivability at any time, will be dead fish in each observation The supplement is given in time according to its same kind and considerable weight.

1. 2. 4 Effect of monochromatic LED illumination on the growth rate of green Dunaliella

Five experimental groups were set up and placed under the R, B, Y, G, and W light sources of this study. Each group was set up with 3 replicates, and the photoperiod was 12L: 12D. After 3 days of culture, it was taken out and its growth was measured. rate.

Take a certain amount of algae, place it in a Petri dish, add BBM medium, and after 1 day, observe the species of algae by microscope; shake up the culture medium and take 3 ml of the algae cell suspension in 7 small Petri dishes. Then, the culture dish was placed at 20 cm from a UV light source with a power of 15 W, and irradiated for 0 s, 3 min, 5 min, 7 min, 10 min, 13 min, 15 min, 17 min, 20 min, respectively. The algae changes were observed with a microscope. 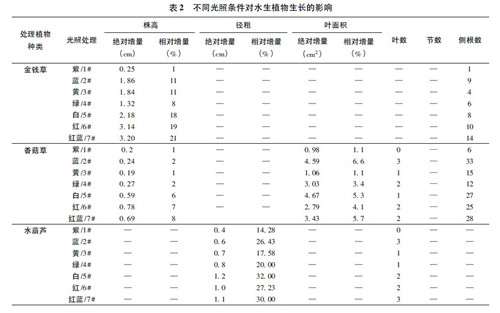 The experiment shows that there are significant differences in the growth of four aquatic plants grown under different illumination, but the trend of light response is basically the same. Irradiated by red and white light, the plant height of Lysimachia chinensis and green leaves is relatively large, while the relative growth of the plant height of Lysimachia chinensis is small by the irradiation of purple and yellow light, and the leaf diameter of the water hyacinth and the leaf area of â€‹â€‹the mushroom grass are also expressed. The same result; Blu-ray treatment of Lentinula edulis grows the most new leaves, while the purple light is the least; blue, red light treatment of Lysimachia, blue silk leaves and mushroom grass roots grow more, and purple light is less.